Valley Musical Theatre is proud to present “The One-Act Play That Goes Wrong”, a hilarious farcical comedy & a play within a play, where thespians putting on a murder mystery & everything goes wrong!
Once upon a time there was this little British play within a play….
“The One-Act Play That Goes Wrong” by Henry Lewis, Jonathan Sayer, and Henry Shields, is a hilarious farcical comedy with a play within a play. The show begins before the curtain has even been raised, as the audience are present while the Cornley Polytechnic Drama Society prepare to stage their new production – the 1920’s murder mystery ‘Murder at Haversham Manor.’
You all know the classic murder mystery story. There has been an untimely death at a country manor, everyone is a suspect, and an inspector is set on the case to find who the culprit is.
However, when this play is performed by the accident-prone thespians of The Cornley Polytechnic Drama Society, everything that can go wrong…does!….but the show must go on! Mayhem ensues, the acting gets worse, and the set becomes increasingly dangerous, but the company struggles on regardless. The question is whether any of the cast and crew will remain standing, or conscious, by the final curtain?
Meet the Cast Video: https://www.youtube.com/watch?v=3Ti58uNldxk
When: February, 3 – 5, and 9 – 11, 2023
Where: The Ramsay Center and Ballroom (416 N. Pearl St., Ellensburg, WA)
Ticket information: https://our.show/valley-musical-theatre/play-that-goes-wrong or at https://www.valleymusicaltheatre.com/2023-playthatgoeswrong
Ticket Prices: Student/Senior – $10 General – $15 ($5 more at the door)
Location details: The Ramsay Center Ballroom is located directly above The Clymer Museum. The door to access the second floor is between The Clymer and The Rodeo Hall of Fame. Please note that The Ramsay Center is a historical building that is in the process of being restored. At this time it is not ADA accessible, has no wheelchair access, and there is no elevator to the 2nd floor. 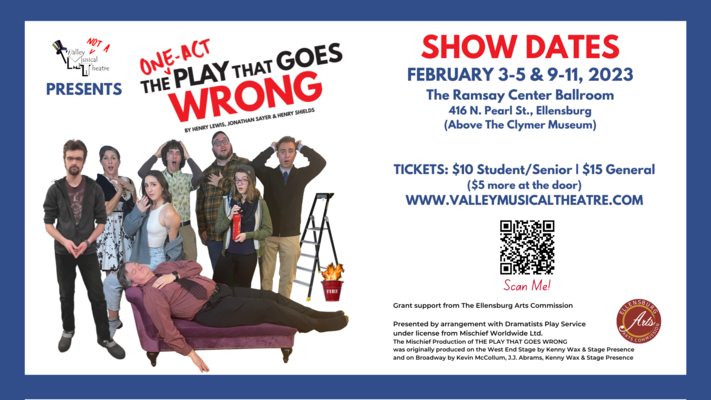