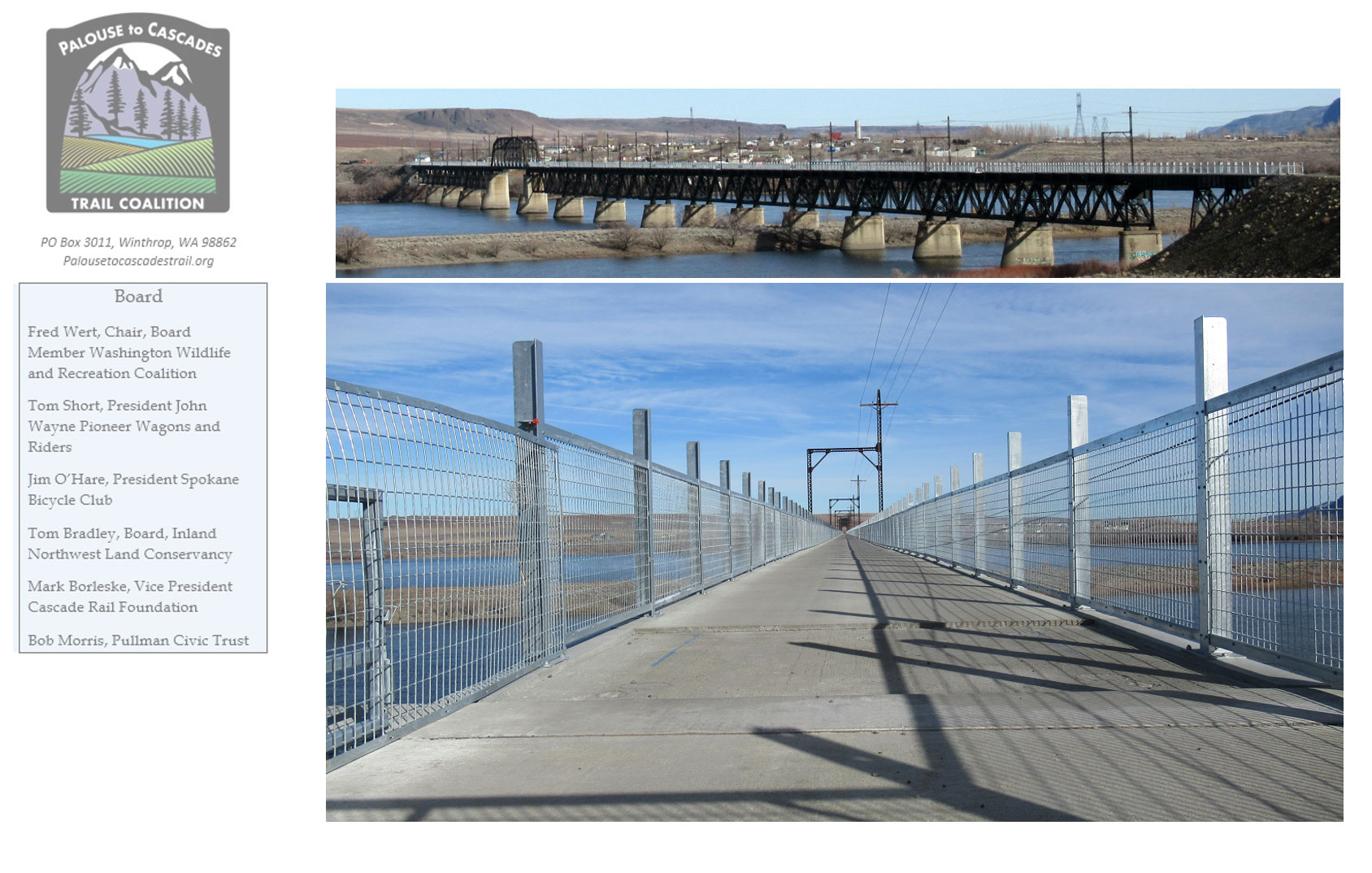 Across the Columbia River on Cross-State Rail-Trail

Beverly, WA. A critical link in the Palouse to Cascades State Park Trail (PTCT) is now complete. With new decking and railings, the historic Beverly Bridge in Beverly, WA will be open to non-motorized use beginning April 8th, 2022. The bridge’s reopening after 42 years of disuse represents a celebration for users of the state’s longest rail-trail.

Spanning the State of Washington from the western slopes of the Cascade Mountains to the Palouse in the eastern part of the state, the 289-mile-long PTCT highlights Washington’s diverse and scenic landscapes, traveling through evergreen forests and dark tunnels, over soaring trestles, across rivers, and through land carved out by the Ice Age Floods and the rolling hills and wheat fields of the Palouse. It is used by cyclists, walkers, horseback riders, rail historians, and trail enthusiasts.

“The Beverly Bridge is a landmark example of industrial prowess and railroad structural engineering at the turn of the 20th Century. Completed in 1909, this bridge was built for the ages. Sadly, it was abandoned in 1980, as part of a major Milwaukee Road retrenchment. Dormant for 42 years, this bridge once again it serves a purpose; to connect both sides of the state. It continues as a link between the Cascades and the Palouse, as the name of the trail adeptly recognizes, this time by recreational and heritage travelers” Mark Borleske

Prior to the renovation of the Beverly Bridge there was no easy, safe route for travelers on the PTCT to get across the Columbia River; detours of more than 100 miles on major State highways were required.

Completed in 1909 by the Chicago Milwaukee St. Paul and Pacific Railroad as part of its western expansion to Tacoma from Chicago, the Beverly Bridge is 3,052 feet long and 69 feet above the river. The railroad abandoned operations in the 1970’s and the State of Washington acquired the railroad’s property including the Beverly Bridge in 1981.

The bridge is owned by the Washington State Department of Natural Resources (DNR) but was renovated by and is managed by the Washington State Parks and Recreation Commission (WA State Parks). In addition to the DNR and WA State Parks, the renovation involved collaboration by the Cascade Rail Foundation, the Washington Trust for Historic Preservation, the Department of Archaeology and Historic Preservation, and the Palouse to Cascades Trail Coalition, which elevated interest in and enthusiasm for the bridge renovation, as well as supporting funding for the project. Renovation costs were included in the WA State Legislature’s capital budget for 2019-2021.

Although the PTCT is not an uninterrupted rail-trail yet, WA State Parks is continuing to close many gaps. Current priorities include renovating a trestle at Tekoa, rebuilding bridges near Malden that were destroyed in the Babb Fire of 2020, and repairing others that were damaged near Beverly in 2020 and2021.

The official Dedication Ceremony is April 8th, 2022 at 1PM, at the Huntzinger Road trailhead on the west side of the Columbia River.